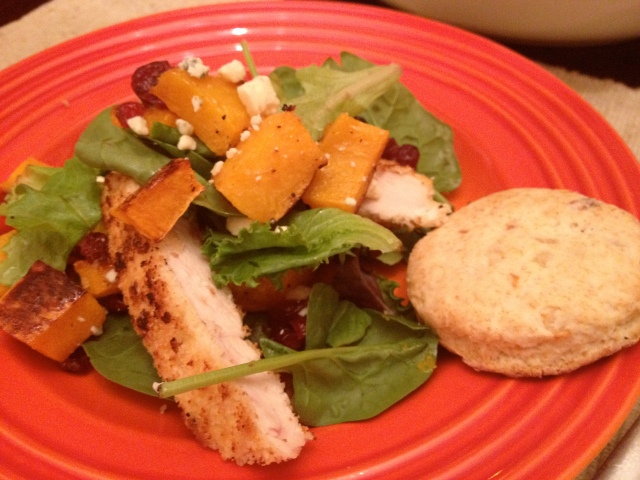 So far this is the simplest recipe I’ve done for French Fridays with Dorie – just your basic biscuit with a little sauteed onion twist. Biscuits are kind of hard to photograph in a pretty way, so that’s why I photographed our very colorful and delicious dinner with the biscuit on the side. I wouldn’t call it cheating exactly, just kind of skirting the rules…

I felt like an amazing multi-tasker tonight because I roasted the butternut squash for the salad with honey (yum!) I made the dressing for the salad, I breaded and pan-fried the chicken, and I made these biscuits! I sense a little horn-tooting coming on…tootle-toot! But really I’ve made this salad 3 or 4 times and it’s super delicious so this wasn’t actually that challenging. I’m not saying don’t be impressed, I’m just saying don’t be that impressed. 🙂 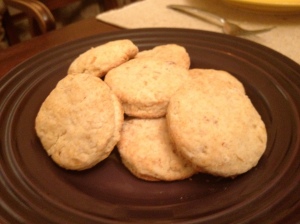 I just couldn’t think of anything cute to garnish this plate with. I need more practice clearly. So to get these bad boys going, you just melt a little butter in a skillet, dice a small onion and saute it for a few minutes, like so: 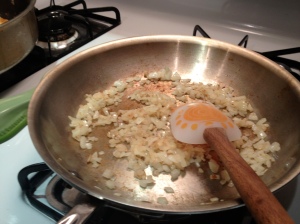 Then you mix up a few key ingredients with your hands, add the onions and the milk and pat it out on a clean surfaced to get biscuit-ed: 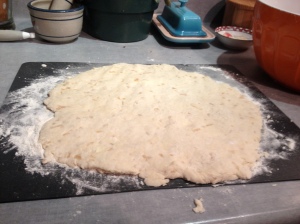 The recipe said it would make about 32 biscuits and I just must be grossly overestimating the size of a regular biscuit or something because I only got 16 and I thought mine were pretty small. Am I missing something? Was this recipe supposed to be called “Mini Saint-Germaine-Des-Pres Onions Biscuits?” 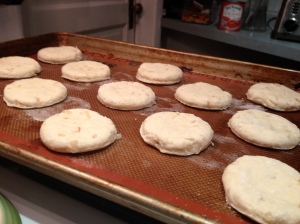 After I had my salad pretty much all ready to go, I popped these into the oven so we could eat them while they were still piping hot and I must say, they were good. They were very good. I am not a huge biscuit person. I’ve never eaten biscuits with gravy, not out of an aversion to them or anything, just because it wasn’t something we made growing up. When we had bread with a meal, it was usually of the Pillsbury variety. I’m not embarrassed. I LOVE Crescent Rolls. And Breadsticks. And Flaky Layers Biscuits. But that doesn’t mean I won’t make these again. I most definitely would. They had a really nice crunch and subtle flavor and were really easy to throw together. I’m not forgoing my refrigerated tubes of dough, not in this lifetime at least, but they aren’t necessary when these were so simple to do. 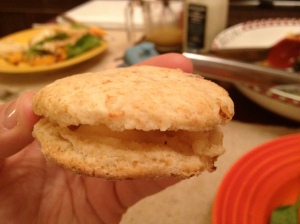 Oh and the salad from tonight is SO GOOD. I was going to save it for my next recipe round-up, but why? I found it here on SkinnyTaste.com and you should definitely make it. I left out the pumpkin seeds and obviously added some chicken breasts that I pounded thin and dipped first in flour, then in a beaten egg, then coated in some panko and pan-fried. They add a nice crunch and some protein so it makes it more of a meal than a side. I never knew how delicious butternut squash could be until I roasted it this way. It’s awesome and cheap and good for you, so you should try it too. I only used half the squash for this salad so I will have to find something to do with the rest. Oooh the possibilities! Hope everyone else thought these were as yummy as I did! 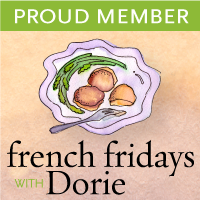