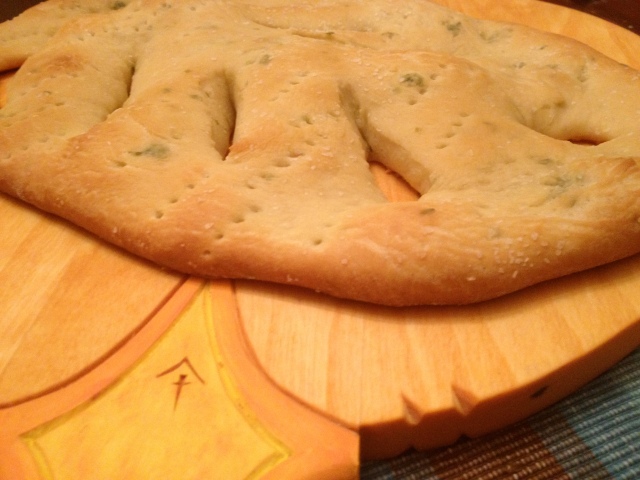 Clearly I changed this recipe an eensy bit. I know I’ve mentioned some of my dislikes previously, but I know this one is going to incur some seriously eye-rolling and incredulity: I pretty much hate all things brined. Pickles and olives are serious no-nos for me. They are just waaaaaay too salty for me to handle. I can’t drink Bloody Marys for the same reason which is basically sacreligious around here on a Sunday. So I knew I was going to omit the olives, but what to add? I had some chives and thyme in the fridge, so in they went along with a little lemon extract since I didn’t have a lemon to zest. But I made sure to use a light hand since I have learned about the strength of lemon extract from previous experience!

I actually mixed up this dough on Tuesday but I didn’t have time to make it until tonight (Thursday) and this is what it looked like when I pulled it out of the fridge:

I stirred it down as directed and split it in half. I’m hoping the other half will last until Sunday since the in-laws are unexpectedly coming over. The rolling out process proved a little difficult. I ended up doing it more like pizza dough with my hands than using the rolling pin. I chose to make a simple leaf pattern and got it set up to hang out on the Silpat for a spell while I ran to the store to get the rest of the dinner ingredients.

My sister-in-law is visiting and tonight is the last night of her stay so I promised to make her favorite – pasta carbonara. I use a Rachel Ray recipe as a base and then I kind of doctor it up a bit. I’d wager to say that it’s my specialty. If you’ve never made it before, definitely give it a try. It’s amazingly delicious and simple and everyone always loves it. How can you go wrong with bacon and eggs and pasta and cheese. All my favorites! I didn’t get the timing exactly right so we actually kind of ate the fougasse as a dessert but it was so tasty, that was fine by us!

All night Hannah and Tristan were laughing about how I was pronouncing fougasse (I believe I mentioned that I have absolutely no French language skills at all) so Tristan looked up the real pronunciation online and guess what! I WAS saying it right! But then Tristan was reading all about fougasse and it said that it was the French version of focaccia which he pronounced “fo-cachacha.” Bwhahahahahaha! It was pretty much the funniest thing I’ve heard in ages. Then we started talking about the cooking class we’d had the night before at the store and how we made this thing called Quatre Quart Marbre which when pronounced the French way kind of sounds like “cat bulb.” French is hilarious! Anywho, we really had a good time eating the ENTIRE fougasse and laughing at our terrible French skills. I will definitely make this bad boy again. I hope everyone else liked it as much as we did! 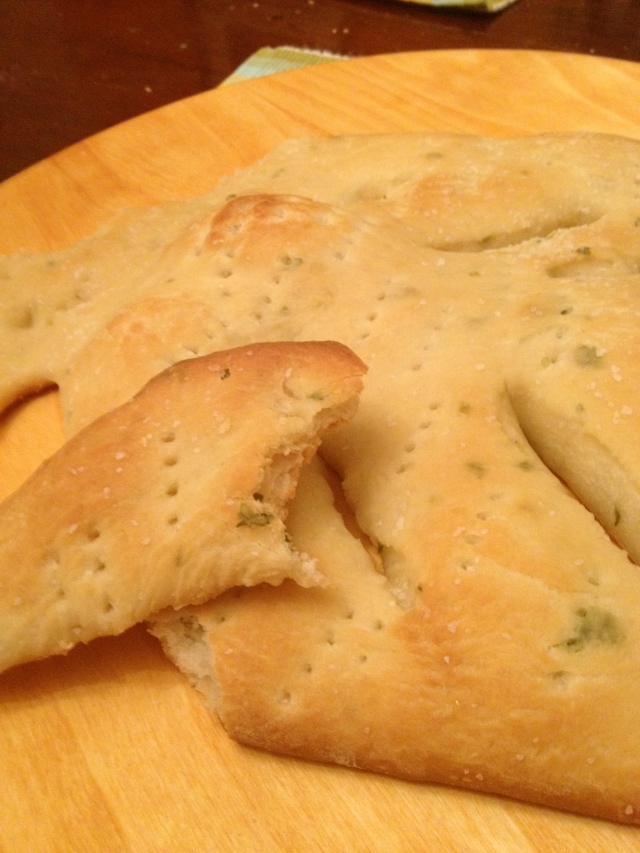