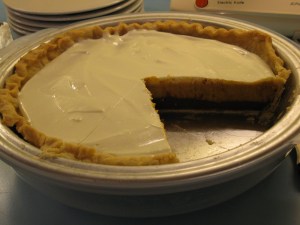 So obviously I made some pies for Thanksgiving. We went to Tristan’s parents and this year I was asked to make the pies, which to me seems like a no-brainer, although last year I was inexplicably asked to make a vegetable side. WTF? Since I got what I wanted, I really wanted to make some impressive pies, so I chose to make a Maple Pumpkin Pie and a Pumpkin Chocolate Triple Layer Pie. I also made a plain ol’ Libby’s pumpkin pie because Tristan thought I should have a plain one in case someone wasn’t feeling adventurous. I was a little disappointed in the maple one because I couldn’t really tell that it was different from the plain one. I ate some the next day though and I noticed that the maple taste was more pronounced, so maybe that one is like soup and it just tastes better the next day after the flavors have time to marry for awhile.

The triple layer one really was showstopper though when I cut it open. I was so proud of how pretty it looked. See for yourself! 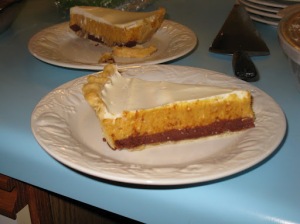 I mean, come on!! It was beautiful! And it tasted fantastic. I cannot believe how good sour cream and sugar taste together! First you make the pumpkin filling. Then you take half that filling and mix it with melted butter and chocolate to make the chocolate portion. You layer first the chocolate, then the pumpkin and bake it until it’s done. Meanwhile you just melt some sour cream mixed with sugar on the stovetop and then spread it over the pie when it’s done. It was definitely my favorite pie of the day. It was a little labor intensive, but definitely worth it in the end. Right now I am making the famous Hershey’s Kiss Peanut Butter Blossom cookies because we are having an event at the store on Saturday and they are my contribution. I kind of hate making cookies, so this is a big deal for me. They just take so much time. I can only bake one sheet at a time so this will literally take me all night. Blah!